Participatory Church and the Trials of Falling Asleep (Luke 22:39-46) 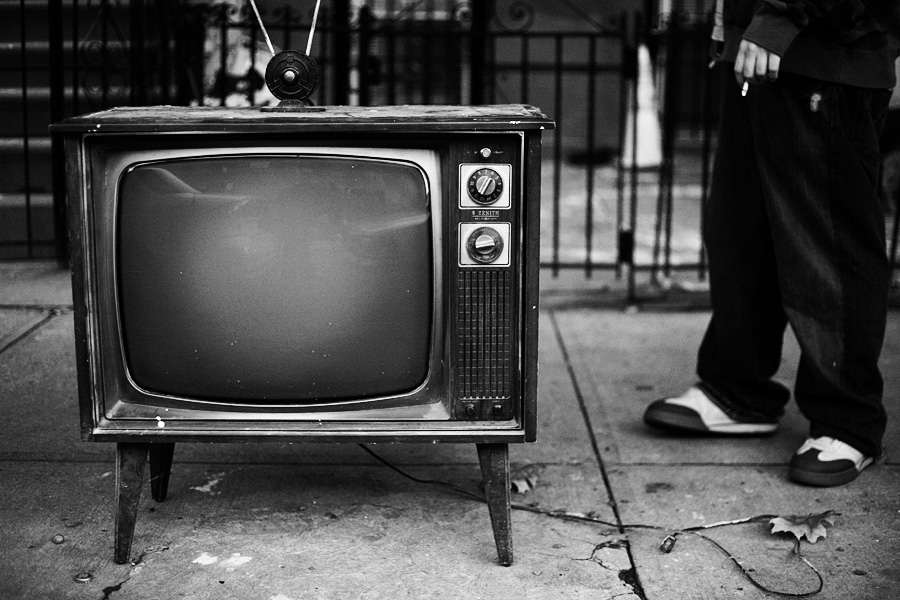 “He came out and went, as was his custom, to the Mount of Olives; and the disciples followed him. When he reached the place, he said to them, “Pray that you may not come into the time of trial.” Then he withdrew from them about a stone’s throw, knelt down, and prayed, “Father, if you are willing, remove this cup from me; yet, not my will but yours be done.” [Then an angel from heaven appeared to him and gave him strength. In his anguish he prayed more earnestly, and his sweat became like great drops of blood falling down on the ground.] When he got up from prayer, he came to the disciples and found them sleeping because of grief, and he said to them, “Why are you sleeping? Get up and pray that you may not come into the time of trial.” (Luke 22:39–46 NRSV)

The word participation is an important word for our church. We talk about being a participatory church but what do we mean by that? I want to unpack that a little here.

Participation means to partake, to partner.

We live in a participatory culture. Back 50 or 60 years ago when you listened to a story around a radio, it was one way. TV in its earliest stages was one way. There was someone who wrote a story, produced a show that he or she thought consumers would like. But nowadays things are very different. Reality shows like Survivor, So You Think You Can Dance (my favorite), American Idol and many others build on the content that the audience gives. It could be through voting. It could be through suggestive story lines. Producers are constantly looking for interest of fans and which characters they like most, which ones they connect with, which story lines are most popular. There are shows like Arrested Development, Veronica Mars or Joss Wheadon’s Firefly where when they go off the air the Fans rally and actually get the producers to make more of their favorite show, even in helping raise money for the show to get it back on the air.

Participatory culture is active, engaged, creative. It is about making what it is you want to consume. Everyone expects that they can be a part of the conversation, that their voice matters, their experience or insight is necessary.

Participation is about taking something and making it your own. It is about showing up, sharing control and taking care of one another.

Patricia Madson, in Improv Wisdom, sums up the difference between participation and consumption when she says:

The old response “It’s not my job” is never an acceptable excuse for the improviser. It’s always my job, if the job needs doing and I am there to do it.

In a participatory church like ours there is no outside organization that will save us if we need saving, fix things if they get broke, or hand down edicts from on high for us to heed to. We are the church and the success and vitalization of this community is dependent upon each one of us.

Jean H., one of the matriarch’s of our community, once told me:

“If you’re looking for a helping hand, you’ll have to look no further than the end of your own arm.”

What I like about this is that it is a reminder that the church is the people who show up, who are here now, who hang in there through the trials of suffering, who celebrate together, who take care of each other and when Christ calls us there is no one else to do the work but us.

During our retreat last week Sheri H. made a wish that we would have silent worship on Sunday morning prior to our regular meeting for worship. Later she said to herself, “Sheri stop complaining, if you want to there to be silent worship, then do it.”

This is at the heart of the participatory church. We create and produce what it is we want to be a part of. We find we are more emotionally invested in the community when we are part of the creation of the community.

So long as we wait around for someone else to get it done, or pay the bills, or clean up the spot in the rug, or start a bible study, or whatever it is, it’s probably not going to happen.

The Trials of Falling Asleep

I love this scene in Luke where Jesus goes to pray at the Mount of Olives.

What happens here is the challenge that underlies what it means to be a participatory community.

The core point of this story is that Jesus needs his disciples, he is inviting them into a participatory understanding of his work and the temptation is to constantly fall asleep, to lose sight of that and become disconnected.

And so Jesus invites his disciples to participate by praying.

In the church, prayer is participation. And it is one of the most important and transformative way to participate.

My guess is that those of you who have ever prayed for another person in this church, or have been prayed for, or have prayed for the health and well being of this church, feel a deeper sense of connection and investment to this community than you would otherwise.

When I pray I invest myself in the life of others. I become spiritually awake and therefore connected to what is unfolding before me.

To pray is to be engaged. When we offer authentic prayers of the heart we are working as producers rather than consumers.

When we pray we are changed.

We are the ones who undergo transformation when we lift up our prayers for one another. I think this is partially because we are inviting God to be a part of our lives, and I also think it is partially because when we pray we are thinking about the ways in which we might be the answer to those prayers.

I don’t pray for someone to have food to eat, if I can help provide the meal. I don’t pray that someone might find peace in their life, when I am the one withholding forgiveness.

Jesus tells his disciples to pray:

“Pray that you may not come into the time of trial.”

To pray that we don’t come into trial is a recognition that we are vulnerable in the face of suffering, that heavy trials bend us when the weight becomes too much, and we can break when the impact is too strong. Anything that tempts us to go to sleep is what we are praying to not be led into.

In other words, to pray that we don’t come into trial is a prayer to wake up. It is a prayer that is meant to keep us engaged in awareness and in participation.

It is a prayer that we do not fall asleep, and fall into distraction. So that we don’t forget that we are God’s, that we need one another, that we must always remain invested in the movement of God in this world otherwise we may fall asleep and miss what is happening. 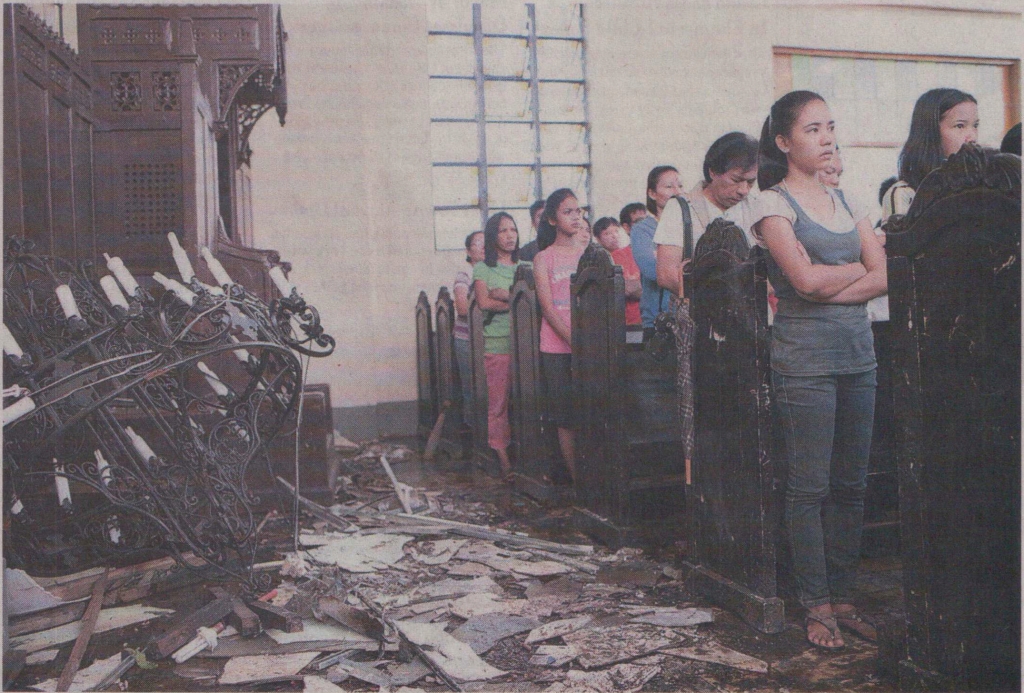 I came across this image last week when I was reading the paper.

What do you notice about this picture?

When we talk about participatory churches in our society we have to realize that there is a lot working against us, there are many “trials” that get in the way for us being truly engaged, showing up, and doing what needs done.

Some of these things are unavoidable, even necessary. And if we’re honest, some of them are just us being asleep. I mean, would we show up to church the Sunday after a Typhoon hit? What about much lesser crises: an argument with a spouse, a hard week at work, a bad night’s sleep, a birthday party or a favorite sports game are all things that tempt us to become disconnected and to disengage.

When I look at this picture of Filipinos whose lives have been ravaged by a typhoon, at mass in a broken down building I can’t help but wonder about the resiliency, the commitment, the participation these people exemplify with their presence. These are people who are invested in one another’s lives. They have shown up to take care of one another, because they need one another. In the face of deep suffering, they have stayed awake.

Here’s what the Times reported about what one church is doing in Tacloban.

In many places, Filipinos have had no choice but to fill the gaps left by their disabled local governments. In San Joaquin, the Rev. Kelvin Apurillo’s Roman Catholic church, built in a World War II-era United States Army barracks, survived the storm. With roads blocked in the storm’s aftermath, area residents began to place bodies of dead family members in the church yard.

Father Apurillo expected local authorities to handle the burials, but when they told him that they could not, he mobilized his congregation. “The local government was informed,” said Senen Cercado, a parish volunteer. “But we did it on our own.”

Church workers first tried to dig by hand, but rainwater and pools of seawater from the storm surge quickly filled the holes. On Nov. 10 they got a backhoe and dug a pit in front of the church. After a Mass, they buried 110 bodies. Now the grave holds more than 200 bodies, all local residents identified by their families. Temporary markers list the dead, including 22 members of one family.

The church has become a center for local relief distribution. A German aid group is building a field hospital on one side of the church. Remedios Petilla, the mayor of Palo, a municipality that includes San Joaquin, visited the church on Sunday to distribute 500 12-pound bags of rice to residents under the watchful eye of police officers armed with assault rifles.

“People are at a loss, they need somebody,” Father Apurillo said. On Saturday, a resident stopped the priest as he walked on the side of the road, asking if he was planning to leave the disaster zone. “Don’t worry,” he replied, “I’m staying.”

What I see in this image are people standing with Jesus in that garden that day, but instead of falling asleep they have prayed “to not come into the time of trial” and they haven’t.

They are there, gathered as a community in worship. They are there taking care of one another. They are responding to the needs of others despite their own suffering and challenges.

That’s the kind of participatory community I want us to be. In the face of challenges, Camas Friends is here gathered in the name of Jesus, serving our neighbors in need. Doing what needs done. Producing what needs to be created.

One response to “Participatory Church and the Trials of Falling Asleep (Luke 22:39-46)”