Bread and the last(ing) Supper (Luke 22)

This is the message I gave on Palm Sunday this year at Camas Friends. 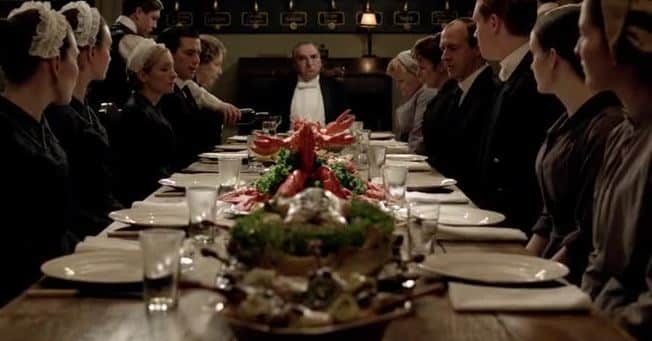 When I look at this text I see a very unusual and meaningful dinner party. It is nothing like a dinner party at the White House, or what we might find on Downton Abbey – the mixed company of this group wouldn’t allow for it.

It is far more like the dinners that happen in the servants quarters downstairs.

This is because Jesus’ disciples were a very interesting and strange lot to have over for dinner. Many of whom were not people who would ever be “invited upstairs” to have dinner with the Lord of the manor. They were all a part of the poor working class of their day. Others were hungry to follow him but lacked the theological understanding or appropriate degrees. There were at least a couple of whom said they were his friends to his face but loyalty to them was rather fair-weather and flimsy. Some came from riddled pasts, broken and suffering from what others had done to them or choices they made along the way.

In a way it was a lot like Mad Hatter’s tea party in Alice in Wonderland.

And today we don’t have to look very far to see people who could make up our own rather mishmashed dinner group.

We don’t have to look very far to find people who aren’t normally invited over to other people’s homes for dinner.

We don’t have to look too far to find brokenness and suffering in the world or to find people who have been mistreated, unloved and rejected by others.

We don’t have to look too far to find people in this church and in our community who are poor and only one pay check or two away from being without a home or food to eat.

We don’t have to look too far to find those who hunger and thirst for connection and understanding but who lack the community or confidence to learn.

On the other hand, we do have to look pretty hard to find where such a mix of people are all invited to eat together and be together in the same place today.

Luke’s Gospel written was written to an economically diverse group of people. Matthew and Mark’s Gospel are poor people writing for poor people. Luke’s Gospel is one that is written for a community that had both rich and poor located within it (via Aaron Scott).

This is important to note because, for those of you who know your bible well, know that Bread – and more generally food – features significantly in Luke’s Gospel. In fact, if I was forced to sum up Luke’s Gospel I might say the word “Eat.”

I had a professor in Seminary who said that Jesus’ table fellowship is so essential to the overall theology of Luke that he had always been tempting to write a book called “Eating your way through the Gospel of Luke.”

‘Who ate with who’ was highly symbolic as it can be still today. Think of all the hub-bub in the news when the President invites someone to the White House for dinner. Or think of the stress involved in knowing who to invite over for thanksgiving dinner, “do we invite cousin-so-and-so over, you know they all talk about X during dinner.”

For religious leaders of Jesus’ time “table fellowship rules” were something you took very seriously. It was not only a matter of being potentially ritually unclean, but it was a statement about your social class, and who were your people/disciples.

In other words, if you’re a popular high school student, you would never be caught sitting at a table filled with the JR High nerd herd. That would wreck you street-cred instantly.

But it’s about more than just credibility too. In the first century – if you are a religious leader who eats with you is counted as an equal, or at least someone who is acceptable in your eyes and in the eyes of God.

So when Jesus ate with women, fishermen, prostitutes, tax collectors, soldiers, zealots, people with disabilities, drunkards, pharisees, he broke all kinds of rules.

If you’ve watched any British TV at all you know that the chauffeur is not supposed to sit down and eat with the Lord of the manor!

So the problem with Jesus isn’t that he ate with people, it’s who he ate with. Jesus invited all the “wrong” people to be his dinner guests.

This is because he wanted to redefine who was to be welcomed in the kingdom of God, who was to be cared for, and who would become the central leaders and participants of his growing movement.

Besides this blending and transgressing of social boundaries that happens when Jesus sits down to eat with – here are a two others things I think are important to take away from Jesus’ last meal with his disciples that can help frame our own inward/outward journey as a church.

“He said to them, “I have eagerly desired to eat this Passover with you before I suffer…” (Luke 22:15)

Passover is a powerful time in Israel’s history. It was a reminder of God’s faithfulness in time of deep suffering and darkness. The passover was the promise of liberation and rescue out of the oppressive Egyptian empire. Both liberation and rescue are really good biblical words for “salvation.” In Exodus we read how YHWH rescued the Hebrew people by liberating them out of Egypt.

Jesus is saying that this posture of servanthood is essential to the shape of how his disciples are to be towards one another and the world. Our eating and fellowshipping together should reflect these values.

Jesus’ suffering servanthood was not meant to help us avoid ours or others suffering, or make us superior to others – instead – it is an invitation into both suffering and being servants in the world.

“Take this and divide it among yourselves…Then he took a loaf of bread, and when he had given thanks, he broke it and gave it to them, saying, “This is my body, which is given for you. Do this in remembrance of me.” (Luke 22:17–19)

What I think Jesus is doing here is connecting the everyday act of eating together and saying that this kind of sharing should be “broken open” and poured out for the world. The word divide literally means “distribute.” And there is a similar feel with breaking and giving.

At the heart of the church should be this act of generous distribution and sharing what we have with one another. Often we feel like we cannot give or share or extend ourselves until we have more than enough, until we are finally in control of our lives, etc. But Jesus’ example here is to take the everyday simple things and share them. The act of sharing is the breaking and giving that Jesus tells us to do here.

Another part of this is that by attaching everyday things that all people do – like eating a common meal together – to himself “this is my body, this is my blood” I believe that he was suggesting that there is a priority of the of knowing and serving God together in community.

Jesus’ bread and wine is meant to bind our spirituality not only to him, but to one another. It means that God will always be found within the body of Christ and that very real and tangible should be met by that same body of people. These are some of the ways that the inward and outward needs we have are to be met.

Finally, Jesus says Do this in remembrance of me. In other words, make this way of eating together, make this servanthood, make this generous sharing with others, the thing you remember to do as you gather in my name. Do it in my honor.

This was not meant to be a “last supper,” but instead a “lasting supper” where all people are welcome and real needs are met continually. This is not something that happened once, or that some churches may do during Sunday morning worship, but rather an entire way of life.

Both the inward and the outward are to be cared for by each of us, directed at one another and the world.

We show our faithfulness and our commitment to Jesus by how we remember this.

And this lasting supper gives us a picture of what a real Jesus-inspired dinner party can look like.

The lasting supper is one in which people are invited to share meals together and those invited are not always the usual suspects but those who are unsuspecting and uninvited.

The lasting supper is a supper where we are the servants of others, where we assume a posture of humility, and where we are willing to not only help, but forgive, and show mercy to anyone.

The lasting supper breaks down barriers that keep people away from the “table of the Lord.” AS the church we can create opportunities where real needs are actually met and real boundaries are actually broken.

The lasting supper reminds us that God is found within the everyday acts of sharing and in the gathered community. We need to find more and better opportunities for this to happen and organize our lives in such a way that these things take precedence in our lives.

If we were invited to a dinner party of this nature would we be willing to go? And are we willing to live into and let the lasting supper shape the way we live our lives?