A Thought On Relient K

This past friday we spent the evening with our good friends Relient K. They played at the Henry Fonda theatre to a sell out crowd of bloodthirsty teenagers, screaming “I Love you Matt” and similar silhouettes of previous times when young rock n’rollers were seen as gods for the masses. This is not to say that the Matt Thiessen, Matt Hoopes, Dave Douglas, and the Johns see themselves as gods, in fact it is just the opposite, so far as I can tell. Having had the priviledge of being their friend “before” their stardom, I was moved on Friday evening when Emily and I were hanging around with them behind stage and on the bus – just chatting about life, wives, and what’s going on in our neck of the woods. I would be easy to let popularity go to the head, I know I’ve wished I had the opportunity to be a famous filmmaker, or folk singer – only the whisper of popularity and one is energized with an uncanny adrenaline. But for being the makers of two gold albums, which are on their way to platinum, they sure are intentionally trying to maintain a modest and humble persona. And for this they are examples to all people, especially the powerful, megachurches of the world – that see fame as the only way to usher in the kingdom. One almost gets the sense that all this happened accidentally, not because they aren’t good because their music is both moving and well orchestrated, but because of the way they feel about it. There was no sense of “deserving it” or entitlement on that bus last Friday, from this we can star crazy Americans can take our cue, some of our stars are more modest than we.

And has anyone, even their skeptics really thought much about the stuff they sing about? I 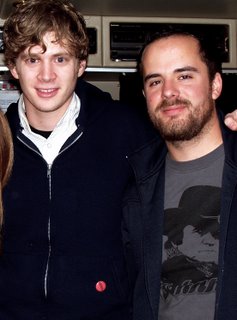 mean really, they have done well at being innovative, creative, and subversive. They may sound like other bands, every band has its influences, but they are really doing music that hasn’t been done. They are an example for Christians who think the only way to create is to knock something off from the general market. Relient K is no knockoff – in fact their ingenuity is well appreciated from someone who considers himself an skeptic and artist of sorts. I am happy that they can’t be pinned into any label. They are good guys, guys who are trying to live Christ-like in all they do. They struggle, just like all of us, but they also keep returning to the Lord for help and forgiveness. They have an even harder ride, living in front of so many people, crammed up on stage or in a road bus as a full-time job. How would that no be difficult. Yet somehow they have maintained artistry, creativity and Christ-likeness.

I think its great that their music is subverting the kinds of things we normally hear on the radio. The stuff they sing of, and the stuff so many teenagers are singing along with and don’t even know it, is pointing in a completely different direction. For most music, at least the stuff geared for teenagers the direction of music is either toward hopelessness, individualism, anger, drugs, violence or sexual love. In a word they are all pointing toward destruction. Now I am not saying that these lyrics have nothing redeemable in them, I think many do, and I think many songs are telling of what is going on in the minds of America’s younger and quite possibly the old as well. But to be pointed in this direction, is to be pointed away from God and toward self – this is what will never help anything. Relient K’s music, turns the direction right around – pointing teens toward hope, optimism, laughter, and Jesus. Whether implicitly or explicitly they process life, real life with all its ills and screw ups, and move toward a hope that can be found outside ourselves. This is what good art, and music does. It moves outward toward the Creator, from the created, any art that is obsessed with self, will go no further than toward the self and offer no real content for life to be interpreted by. Relient K aids in the interpretation of life, through difficulty and triumph. The fact that I saw 1,500 teens shouting along with Thiessen and the others “No I don’t hate you, Don’t want to fight you…” struck me as both odd and beautiful, these are the words of Jesus. At any other concert these words would survey the violence, pride and hatred that is breed within so much of American media and culture. And for these things I think Relient K is showing the church how to be the church without being either/or. So much of the world wants us to either be a Christian or not a Christian. For them the constant question is whether they are a “Christian Band” or not, for them they have broke the mold of the either/or problem – now its just getting this across to the rest of the Christian world. Let’s show the world who we follow by how we live, or sing, and in that they will know Christ better – they will be pointed toward hope away from self.

2 responses to “A Thought On Relient K”