I’ve been doing a lot of listening to music lately. Because I am currently sitting in front of my Imac G5 8 hours a day (at work) plus listening to tunes on my way to and from work, I have had ample time to rip through album after album. Stack this on top of my reading “Restless Pilgrim” the book about Bob Dylan’s Spiritual Journey, and I have been “returning to my roots.” NPR has helped in this pursuit as they continually have live concerts on their website, and today I found a listing for a new version of a Beatles Album called “this bird has flown.” First I check out what there was to be said about this new album from one of their podcasts called on new and upcoming music. Then I discoverd an old archived radio program where All 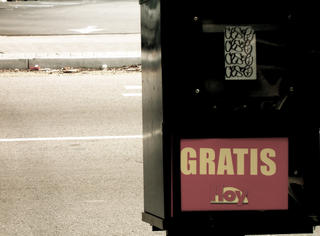 Songs Considered did a two-hour program on the Lost Beatle Tapes. This was a fantastic program and really helped me feel not only nostalgic but also reminded me of my younger days, when I was growing up, becoming the person I am today (one beauty is that all of this music was free). Both the Beatles and Dylan, along with my love and devotion to Jesus have formed the way I understand the humanity, and its creator. There is something so deep and profound in this music, something that moves, and makes, it transforms if you let it. A song like “don’t let me down” led me to think about the power of relationships, I guess in a way it informed the kinds of things I looked for in a spouse, and trustworthy friendships. Returning to this music, is also leading me to think and brainstorm about my own creativity, whether be in my music or in video.

I added this image which I like and took in HP – thanks to Chase Roden for providing the translation “free today.”